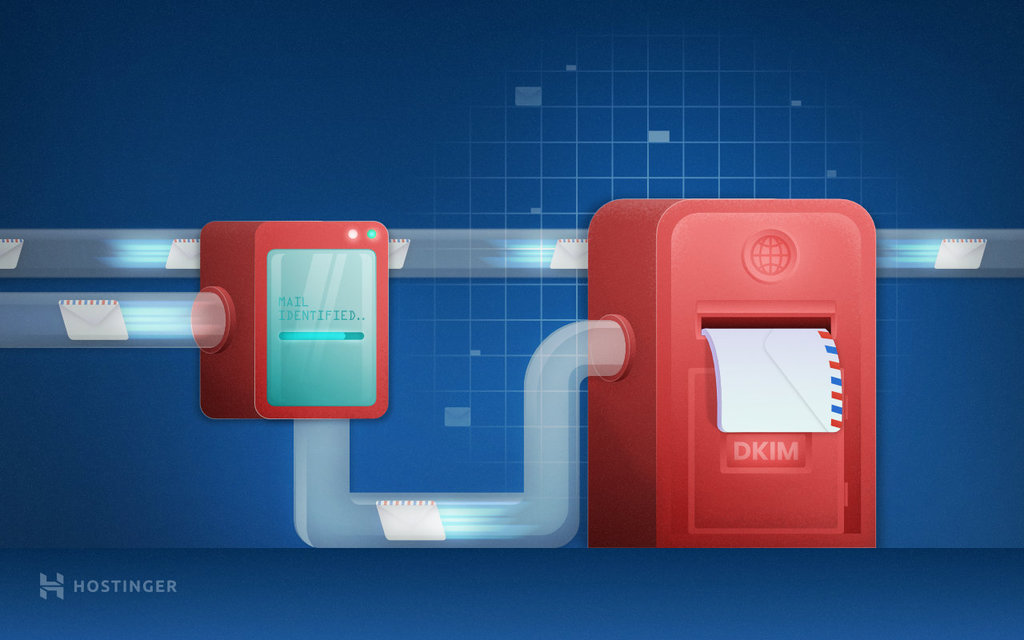 Having troubles with your email marketing campaign? Spent time and money only to find out your emails land in spam folders? If you answer “yes” to these questions, then you definitely need DKIM record to improve your deliverability. In this article, you’ll learn what it is and how to use it.

What Is DKIM Record?

It ensures that the email comes from a trusted source and hasn’t been changed or forged in transit between the sending and receiving servers.

When you send an email, a private/public key pair will be generated.

The private key is used to sign the email, while the public key is published to your domain’s DNS using TXT records — a type of DNS entry that contains information for sources outside of your domain.

In this case, the record is used by the recipient’s servers to validate your emails (we’ll talk more about it later).

The core of the emailing system wasn’t built with any security protocols. So, it is very easy to send emails that appear from legitimate sources (email spoofing).

In a spoofed email, the address displayed to the recipient is different from the actual address. For instance, the recipient sees that the sender is example@trustedsource.com, but it’s actually from example@scammer.com.

As the recipient won’t know the actual sender of the email, this technique is often used in phishing and spam attacks

So by using DKIM, the receiving mail server (ISP) can verify that the incoming mail message that claimed to be from a specific domain is indeed from there. It will be hard for scammers to phish on behalf of your brand.

How Does It Work?

In the sending server, the body and the header of an outbound email will be turned into a hash (a string of unique text, also known as a cryptograph). The private key is then used to encrypt and sign the hash.

Having the decrypted hash in hand, the next task for the recipient’s server is to generate its own hash from the email’s header and body.

If the decrypted hash matches with the recently generated hash, it means the email is genuine and hasn’t been tampered with.

How Can You Implement It?

Implementing a DKIM record to your email could be different depending on your email services. However, in general, the steps are as follow:

1. Create Your Own Selector

A domain can have multiple public keys if it has more than one mail server (each mail server has its own private key that only matches with one public key). A selector is an attribute within a DKIM signature that helps the recipient’s server to find the right public key from the sender’s DNS.

You need to use a tool here, which depends on your operating system. SSH-Keygen is a great option for Linux and Mac users. Meanwhile, Windows users can generate keypair using PuTTY.

3. Adding DKIM Record to Your Domain

After obtaining the public key, you need to paste it into the right place of your DNS records. To do so, the steps may differ depending on your hosting provider.

If you’re using Hostinger, login to your dashboard and pick the desired domain. Head over to DNS Zone Editor and fill out the TXT (text) record using this format:

For other hosting services, try to contact your hosting provider as every DNS editor is different.

Email spoofing is a common issue. In order to counter it, mail providers need some kind of method to ensure that incoming emails are from legitimate sources.

One of email authentication methods is a DKIM record.

We strongly recommend using it to authenticate emails from their domain.

It will help your domain get marked as trusted, and your emails will actually reach the client’s inbox.

So even if it might sound complicated at first, it’ll be definitely worth it in the long run!

Bilqis Addiningrum is a content writer at Hostinger. She's fascinated with all things internet and has a deep passion for WordPress, where a lot of her experience comes from. When she is not sewing or doing craft projects, she loves to teach friends and family about technology and the internet.

More from Bilqis A.

If you’re already comfortable with our email hosting services, you might want to consider moving your messages from your old email account to...

Do you need quick access to your mailbox while on the go? Set up your Hostinger email to stay on top of your activities throughout the day. This can...

How to Set up Email on Samsung Devices

Samsung devices come with a default app called Samsung Email that makes accessing and managing emails on the go much more convenient. However, you...

Hi, all emails sent from Hostinger sign DKIM? Or do i need something in particular?

Hi there, Ariel! For shared and cloud plans, you should enable DKIM as shown in this article ;)

What Are Email Headers? A Comprehensive Guide